Well I start this post in much different surroundings from my last one. I’m sitting on the tatami floor of a beautiful Japanese-style room (right next to the flame-burning space heater, as there is no central heating). The room is divided into 2 identical 6-tatami mat rooms (~10 sq ft each) by a beautiful fabric sliding door, painted with a simple Japanese landscape (currently open so that the whole room is exposed at once). At the entrance of each of the divided rooms is a set of heavy, deep red wooden sliding doors. The room is bare of furniture except for a low wooden table and my futon. 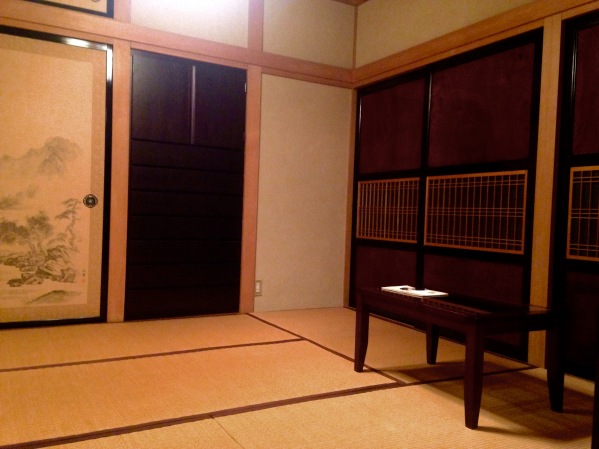 I had Thursday and Friday off this week due to my bizarre work schedule (as well as the superfluity of national holidays in Japan–today is “National Foundation Day,” which I suppose is more legitimate at least than some of the others, like “National Celebrate Children Day,” “The National Day of Old People,” and “National Go to the Sea Day,” all of which are real Japanese national holidays, although I might have taken some liberties with the English translations). Anyway I decided, since I haven’t been out of Tokyo since October at least, discounting my Christmas vacation in the states, to take advantage of the 4-day weekend and embark on a solo trip to a northern prefecture in Japan that I’ve never visited before. I made this plan little less than a week ago, and chose for my journey the prefecture of Iwate.

Since the shinkansen (bullet train), while amazingly convenient, is always (for me, at least) prohibitively expensive (at minimum $100 or so each way, depending on the destination of course), I took a night bus out of Shinjuku station on Wednesday, leaving at 10:30pm, and arrived at Morioka (the capital city of Iwate) at just about 6 in the morning. The night bus actually wasn’t terrible– almost cozy. They block off the windows on each side with a thick, unremovable fabric, so that it’s impossible to look out the windows. Obviously more convenient to help the passengers get to sleep, but there is something eerie and spaceship-like about sailing through the night in a large vehicle, completely blind to your surroundings.

After arriving to Morioka station, my affable and accommodating airbnb host picked me up and drove me to his house where I’d be staying, since it’s a solid 25 minute walk from the station. After he showed me my beautiful tatami rooms, I took leave of him and immediately crashed on my futon for about 4 hours, since I had hardly slept more than 3 cumulative hours on the night bus. When I awoke my host was still around, since he manages a website from home, so he made me a delicious cup of coffee (he apparently roasts his own beans) and showed me around Morioka via Google maps and the giant monitor screen attached to his computer. I had decided to commit my first day of my 3-day trip to exploring the capital city, thinking I’d spend most of the day reading in cafes and recuperating from my nighttime journey. To be honest, Morioka is a bit of a disappointment. I guess I was somewhat unrealistically expecting a cozy, snowy village, surrounding on three sides by mountains, cut through with little rivers, every street sprinkled with pine trees and cozy cafes. But Morioka is a proper city– the train station is 5 times the size of Kichijoji station (by my hazy calculation) and bordered on all sides with skyscrapers. Maybe it’s just because it clashes so harshly with my imagined picture of it, but I failed to find much charm or beauty in the  city. Nonetheless, following my host’s recommendations, I spent a good hour walking through Iwate park and around the ruins of Iwate castle–though even this primary tourist attraction was far less majestic than the name might imply, and it was a bit too cold to spend much time walking around outside.

Again following the virtual tour my host had laid out for me that morning, I then went to a tiny little cafe near Iwate park, tucked back along a footpath overlooking one of the rivers. There were only 3 tables in the whole place and no other customers when I arrived. The middle-aged woman who was likely the owner greeted me kindly, seated me at the table by the window, and chatted with me a bit about where in Japan I lived and what brought me to Iwate, once my Japanese had assured her that I likely wasn’t a tourist. For about 2 hours I sat there gazing at the rather unremarkable river and the distant mountains, drinking some very delicious coffee and reading the Brothers K.

Later that evening, I strolled back to Iwate park, and found myself to be far more impressed with the grounds at night than I had been earlier in the day. Today turned out to be the first day of a 3-day “snow-lighting” festival, which includes a little series of snow sculptures encasing large, luminous candles. My favorite sculpture was the Darth Vader one, but only because some older Japanese woman, upon recognizing the figure exclaimed “Darth Vader!” and then proceeded to sing the Star Wars theme song while her friend ignored her and moved away to take pictures.

Although my first day in Iwate was perhaps a little less picturesque than I had envisioned, tomorrow I’ll be setting out bright and early to a far more rural and charming corner of this snowy prefecture– an old folk village about 2 hours outside of the capital called Tono. I only hope my friendly host is also up at 7am tomorrow so he can make me more delicious coffee.