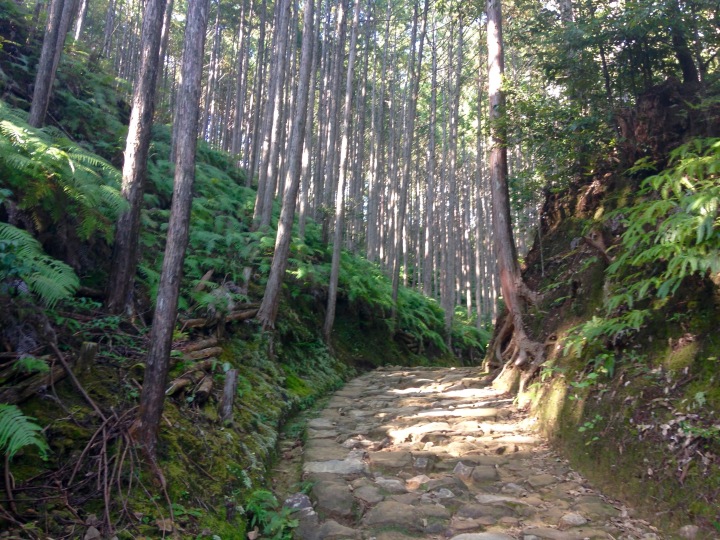 Tonight is my second night staying at the big Japanese house in Kii-Tanabe. Last night I was the only guest, but tonight there’s 2 other families staying here with me–all Japanese–for a total of 6 other guests (4 adults, 2 kids). One of the kids is actually screaming in the next room at the moment. The walls are surprisingly thick, though, so even though I can tell by the tone of her voice that the 2-year-old girl is having a real fit, it’s actually not that loud in my adjacent room. This little girl and I definitely didn’t bond much this evening, as she spent most of it glaring at me suspiciously, and then somewhat cutely hiding herself behind a handkerchief as she rode next to me in the car. I did bond a bit with the other kid, though, a 6-year-old named Keita. I think in general I find it much easier to bond with Japanese boys than girls, and that goes for my students as well, actually. After my host and hostess entreated me to play a few songs for the group on their living room guitar, I handed the guitar to Keita and we had a little lesson. The body of the guitar was twice the size of his entire torso, so he had more than a little difficulty holding it, but by the end of our lesson he managed to push the string down on a fret strong enough to make a sound, which I thought was great progress. And more impressively, despite having no idea what to do with his hands and looking at me constantly in a pleading bewilderment, he seemed instantly fascinated by the instrument and never wanted to put it down.

But to back up a little– yesterday evening I arrived in Kii-Tanabe so I could embark on a small section on the Kumano Kodo today. When I got to my hosts’ very spacious, well-built house out in the inaka (countryside), they laid out an elaborate dinner of grilled fish and sashimi, all of which the husband had caught earlier that day on his boat. Actually, some of the fish we had tonight was caught by Keita, Keita’s dad, and the husband, who ventured out on the ship together earlier today. After my first dinner, my host and hostess took me to a small onsen (hot springs) about a 15 minute drive from their house where they have a membership, so we can get in for free. By the time we got home I was so pleasantly sleepy that I only managed to do a bit of last minute prep for my Kumano trek before falling asleep. This morning I woke up around 6, had an early breakfast, and then headed to the station to catch the 8am bus to the Kumano Kodo route that I would be transversing.

The route I took connects the massive shrine Hongu Taisha to the hot springs village Yunomine Onsen. I took the longer route between these stops through the mountains, which was about 13 km in total through forest trails and across farmlands. I think my favorite part of the entire trek might have come one hour into my walk. After climbing through a shady forest trail for a few kilometers, the trail suddenly opened up onto a clearing and you found yourself right in the middle of these sparkling green mountains. I don’t know how to describe it– it was like you could jump off of the clearing’s edge and land into this soft green mountain bed below. And best of all, perched right against the edge was a tiny cafe selling onsen coffee and little pastries. I think that will forever be the best view I’ve ever had from a cafe. And that includes the forest cafe that my sister and I sat at on the Ogasawara Islands where you could look down over the cliffs onto the emerald ocean below. 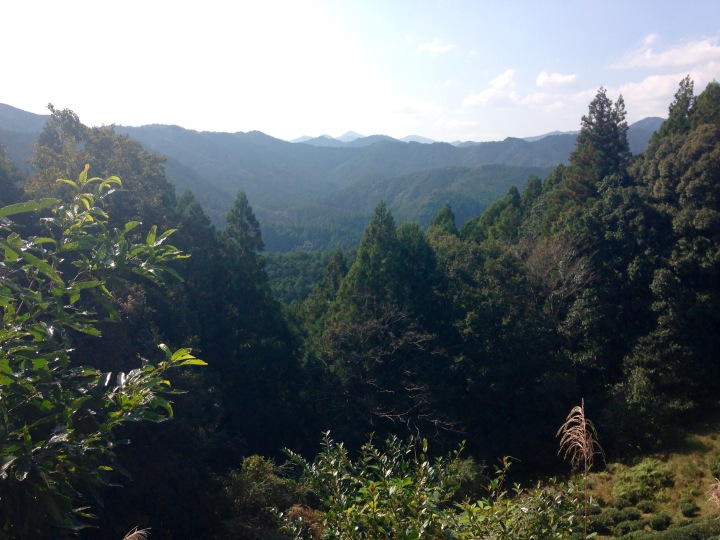 The whole trek to Yunomine Onsen took me about 5 hours, including copious breaks, especially during the steep, uphill portions. But for the most part the trail wasn’t too arduous. The path leveled out at the summit of one of the mountains for a long stretch, so on either side you were flanked by the endless sea of green mountains. 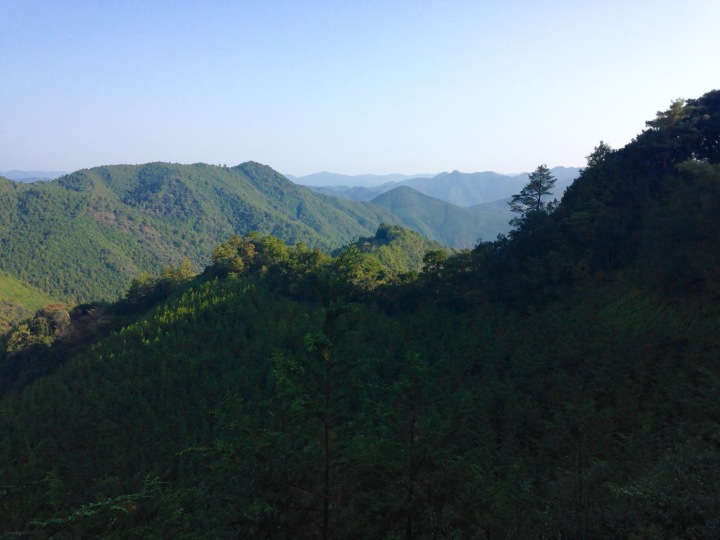 I got to Yunomine Onsen around 3pm, so more than enough time to walk around, eat a late lunch, and most importantly, chill in the delicious hot springs for a good while. There were actually a surprising number of foreigners walking along the Kumano road– 2 of whom I spoke to during my trek, and then saw both again when I arrived in Yunomine Onsen. I even managed to act interpreter for some of them who came into the restaurant where I was eating lunch trying to call for a taxi.

After my 5-hour hike, 2 onsen dips (we returned to the Kii Tanabe onsen again after dinner tonight), and a massive dinner of grilled fish, sashimi, yakisoba, and curry rice, I’m looking forward to sleeping in tomorrow for as long as I can manage without being rude by holding up breakfast too long. After that I really have no plan for the day, aside from taking the night bus out of Wakayama city at 9pm. One of my students, whose grandparents are from Wakayama, enthusiastically suggested I hit “Adventureworld” which I guess is some sort of amusement park/zoo, but I don’t really think that’s for me… My host here has hopefully suggested us going fishing together at least twice now, so I may take him up on that. I’m not so enthusiastic about the fishing part, but being out on the ocean in his boat does sound nice. If only Keita was still around tomorrow and could join us, but he and the rest of the Japanese guests here are all heading to Adventureworld tomorrow…

2 thoughts on “Pilgrimage to the Sea and Mountains – Part 2”